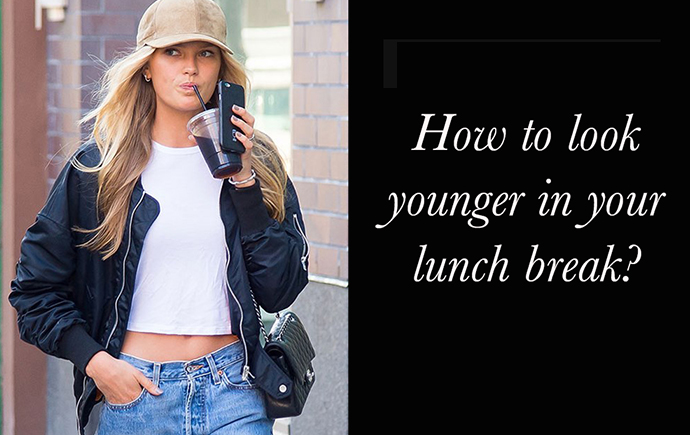 These days, time is one of the most precious resources any woman has. The result of juggling a million balls at once? There’s little time left for youth-boosting treatments. But now there’s a new breed of fast, effective anti-ageing options available that will take years off—with zero downtime. “Little things like refreshing your hair colour or whitening your teeth are great solutions, and can make a big difference,” explains dermatologist Dr Stephen Shumack. Here, we reveal the tried and tested anti-ageing fixes that will help stop time in its tracks. Ready?

How it works: This upright bike has you exercising in an airtight chamber from the waist down for 30 minutes, three times a week. Gentle vacuum pressure is applied to amp up circulation while you pedal, resulting in faster fat breakdown and the smoothing of cellulite on the thighs, buttocks and hips. A study from the Medical Prevention Centre in Hamburg showed that a Hypoxi workout is significantly superior to a conventional one—participants lost more weight using the Hypoxi three times a week for four weeks than those who used a stationary bike for a similar period of time. Impressive.

The verdict: “After hearing that I could lose up to 30cm from my lower half in just four weeks, my response was ‘strap me in’. Cycling while wearing a neoprene skirt was odd at first, but the sessions weren’t strenuous and I was still able to chat, answer emails and shop online (iPads are provided). After two weeks I began to notice a change, but the final measurements at the end of the program were astounding. I lost 38.5cm in total as well as 4.7 kilos! Yes, I was strict with the dietary requirements (no carbs, coffee or sugar for four to six hours after each session), but the results were worth it. Ideal for a special occasion or to kickstart a fitness regimen.”

How it works: This innovative technology was developed to create foil-free shades with precise levels of blending that deliver a softer result. Gentler than traditional foil techniques, the process allows colour to develop in the open air next to untreated hair for a gentle graduation of shades, while the formula contains polymers so colours won’t run or bleed.

The verdict: “Hairstylists have always recommended going lighter as you age, and after countless hours at the salon as a devoted bottle blonde, fast, foil-free colour sounded too good to be true. My hair was divided into sections and highlights were hand painted and smudged for a natural, blended result. My new colour was naturally creamy with a glossy finish. The best bit? I was out the door in two hours. I’m addicted.”

How it works: Traditional whitening usually takes an hour, but this revolutionary new system brightens your pearly whites sans pain in less than 15 minutes. Hydrogen peroxide gel is infused with ozone to accelerate the whitening process by stimulating the release of oxygen free radicals. A UV light is applied, shortening the time required for a bleaching agent to be in contact with teeth, lowering the risk of sensitivity.

The verdict: “I’ve had professional teeth whitening before, so I was worried about this, to put it mildly. After being fitted with a mouthguard to shield my gums, hydrogen peroxide was applied to my teeth and UV light was activated on a timer for eight minutes. While I felt a heated sensation on my gums, there was no shooting pain. My teeth were several shades whiter—no paracetamol necessary!”

The cost: $90 per treatment