How Cheryl Cole got her X Factor: Cycling in a vacuum by EXPRESS, UK

How Cheryl Cole got her X Factor: Cycling in a vacuum

THE latest fitness craze sweeping celebrity land promises to banish cellulite and burn fat without you having to break into a sweat. We put it to the test… 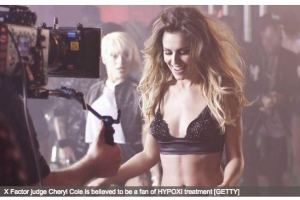 While Cheryl Cole and Mel B’s wardrobe choices for the X Factor auditions may have been hotly contested, one thing that everyone agreed on was how trim and toned they both looked.

The judges reportedly got in shape for the new series of the hit ITV reality show with the help of HYPOXI treatment – an exercise bike housed in a pod that uses a vacuum technique to increase blood flow to the lower half of your body.

HYPOXI is nothing new. It was developed in the Nineties by Dr Norbert Egger but has become popular again thanks to its “quick and easy fix” appeal.

It uses the “natural principles of lipidmetabolism” to reduce fat deposits in problem areas such as the stomach, hip, buttocks, thighs, cellulite and weak connective tissue.

It’s recommended that users do six or 12 sessions over the course of a couple of weeks, depending on how much fat needs to be lost.

I tried the shorter course of six classes, which are a “pick me up” to help “tone, smooth and tighten the skin” before a holiday or special occasion. 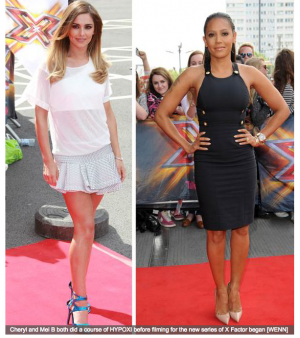 During my first session the HYPOXI trainer explained that as well as committing to three half an hour sessions, on alternate days, during the week, I must also adjust my diet to see optimum results.

Out went the gin and tonics – you can’t burn fat when you have alcohol in your blood stream – and in came protein heavy meals with lots of green vegetables.

I also had to load up on complex carbohydrates, such as wholegrain pasta and bread, two to four hours before my sessions.

The trainer took measurements of my waist, stomach, bum, hips and thighs, before I climbed into the pod and would measure me again at the end of the course to see how much weight I had lost.

Although HYPOXI is basically cycling it is as far removed from a spin class as you can get.

You must keep your heart rate and pedal speed in the fat burning zone, rather than the cardio so you don’t really break out into a sweat.

And, there’s no instructor barking orders at you or loud disco music playing.

I did each of the classes at a centre near work during my lunch break and was able to read a magazine or catch up on emails on my Blackberry while in the pod. 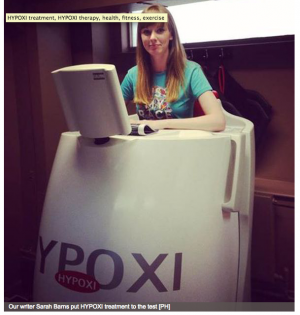 After my first session I noticed a strange, pins and needles like feeling in my legs and feet, which is expected and dies down after a few hours. This sensation lessened the more sessions I did.

HYPOXI is “completely holistic” and has no side-effects. Anyone can do it unless you are suffering from a severe illnesses such as heart, circulatory, metabolic, muscular or skeleton conditions.

Kate Moss has reportedly had one of the machines installed in her North London home and Victoria Beckham has started having sessions as she’s “worried about developing cellulite”.

It costs £500 for 12 sessions so doesn’t come cheap. However, the results are quite astounding.

The trainer told me that, after a full course of 12 classes, you can expect to lose 7cm from your stomach, 5cm from your hips and waist and 4cm from each leg. These measurements are roughly dropping a dress size for most women, who are an average size 14.

Despite only doing six sessions I lost 2cm from my stomach and 1cm from my hips. However, the main difference appeared to be in my skin tone.

The skin on my legs appeared tighter and less bumpy, while my skin tone looked brighter.

While HYPOXI may be quite expensive (averaging approximately £40 a class), I think it would be a worthwhile investment for a wedding or big event.

If it’s good enough for Chezza…