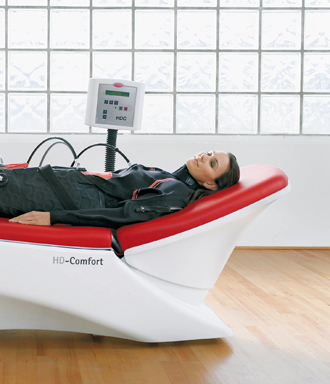 Used on its own, the HDC can help improve the skin’s tone and texture. However, the real beauty of the HDC is when it is combined with HYPOXI’s other training devices. Undertaking the HDC prior to either a L250, S120 or Vacunaut session will see you accelerate your results and reduce the appearance of cellulite. The central feature of the HDC is the complex network of 400 integrated pressure chambers located around the stomach, hip, buttock and thigh region.

The HDC chambers act in a similar way to manual cupping, however in its refined state has a number of advantages. The highly effective design of the HDC means there no need for direct skin contact. This results in a holistic, non-invasive soft massage combined with compression therapy. The HDC applies a gentle suction and soft compression on the dermal tissue, which increases cell metabolism and stimulates the circulatory and lymphatic system. The operation of the HDC chambers during the 20 minute program results in a greater surface area of skin being treated for up to 100 times longer than with traditional manual cupping.

Cupping is an ancient application of Chinese medicine which has been used since at least the 4th century to combat the stresses of daily life on the body. Acknowledging its benefits, HYPOXI adopted the technique and developed it into a contemporary and sophisticated and relaxing treatment.